Thanks to movies such as  Ip Man and the iconic martial arts legend Bruce Lee, Wing Chun is fast becoming a martial art as popular as karate or kickboxing. A traditional Chinese kung fu that traces its roots all the way back to the Southern Shaolin Temple, Wing Chun is now considered one of the most efficient self-defence systems in the world. With its emphasis on simple movements and body mechanics rather than on strength, it is suitable for both men and women, young and old, regardless of current fitness levels.

A Brief History of Wing Chun

The origins of Wing Chun are shrouded in mystery and legend. The most popular story of how Wing Chun evolved involves Ng Mui, a Buddhist nun who escaped the razing of the Shaolin Temple by the Manchu government. Ng Mui created a new system devised to counter the larger, more powerful movements of other styles, one that could also be mastered in a shorter period of time. She named the style after her first student, a woman named Yim Wing Chun.

Whether this and subsequent stories are true is very hard to say, as there is little documented evidence from that time. More information is available from the 1800s, where the art was passed from Leung Jan of Fatshan, to Chan Wah Sun, and then on to the late Great Grandmaster Yip Man (or Ip Man), whose Wing Chun system is currently the most widely practised worldwide.

A Quick Guide to Wing Chun

Regardless of level, the 4 key stages inherent in all Wing Chun training are:

Wing Chun is a complete self-defence system covering all 5 ranges of unarmed combat:

Unlike some martial arts that teach hundreds of fixed techniques, Wing Chun's effectiveness stems from just a handful of simple concepts and principles. These principles apply to all situations, and can be learnt by anyone, regardless of strength, stamina or overall fitness.

Every motion in Wing Chun is an application of one or more of the above principles. This may sound simplistic, but in a life-and-death situation, less is often more. Our teaching system addresses realistic self-defence situations, and adapts ancient techniques to suit the needs of the modern man.

The complete Wing Chun system teaches total self-defense across all the unarmed ranges mentioned above, and includes programmes on dealing with multiple and armed assailants. We hold additional seminars on advanced techniques, ground fighting, and sparring. We will also cover the internal components of the art, called  Chi Kung – the Art of Healthy Movement.

How We Teach Wing Chun

It is important to remember that Wing Chun is, first and foremost, a martial art for self-defense. It is  not a competitive sport centred on points-scoring in sparring matches. Our teaching system constantly addresses realistic self-defence situations, and adapts ancient techniques to suit the needs of modern society.

Learning Wing Chun can be very much like learning a foreign language: at first, everything will seem odd and unfamiliar, especially as the Wing Chun principles, although logical, are not always instinctive. With constant practice, we aim to re-train your reflexes, such that the correct movements will happen without conscious thought.

You will begin your Wing Chun training at the 1st Student Grade (1SG). This takes around 8 weeks to complete, providing you with a basic foundation of the Wing Chun system. Areas covered in the 1SG include:

After the first couple of months, we are confident you will be better able to defend yourself. Other benefits you will notice is improved relaxation, coordination, feeling more at ease in close quarter situations, as well as increased awareness of yourself, and of aggressive intent in others. The  complete system of Wing Chun, however, cannot be taught in mere months, which is why you are then able to continue training for as long as you wish.

The wooden dummy, Muk-Yan Chong has a distinctive dulcet clack sound when stuck. The different elaborate strikes and timing of the wooden dummy form sections have their own tempo and rhythm and after a while they make a soundtrack for you whilst you train which becoming music to your ears. The dummy's unique nature also ensures there is a close connection between the martial effectiveness of the wing Chun attacks and the ability to grasp and recreate the percussive patterns.

The nature of these cultural traditions leaves them invisible to many students who draw upon them in their daily training. It takes a conscious effort to understand and bring questions of rhythm and aesthetics to discover the ways in which they are linked to the strategies of the Wing Chun system.

Learning to identify these will improve both the practical and academic understanding of this Martial Art. 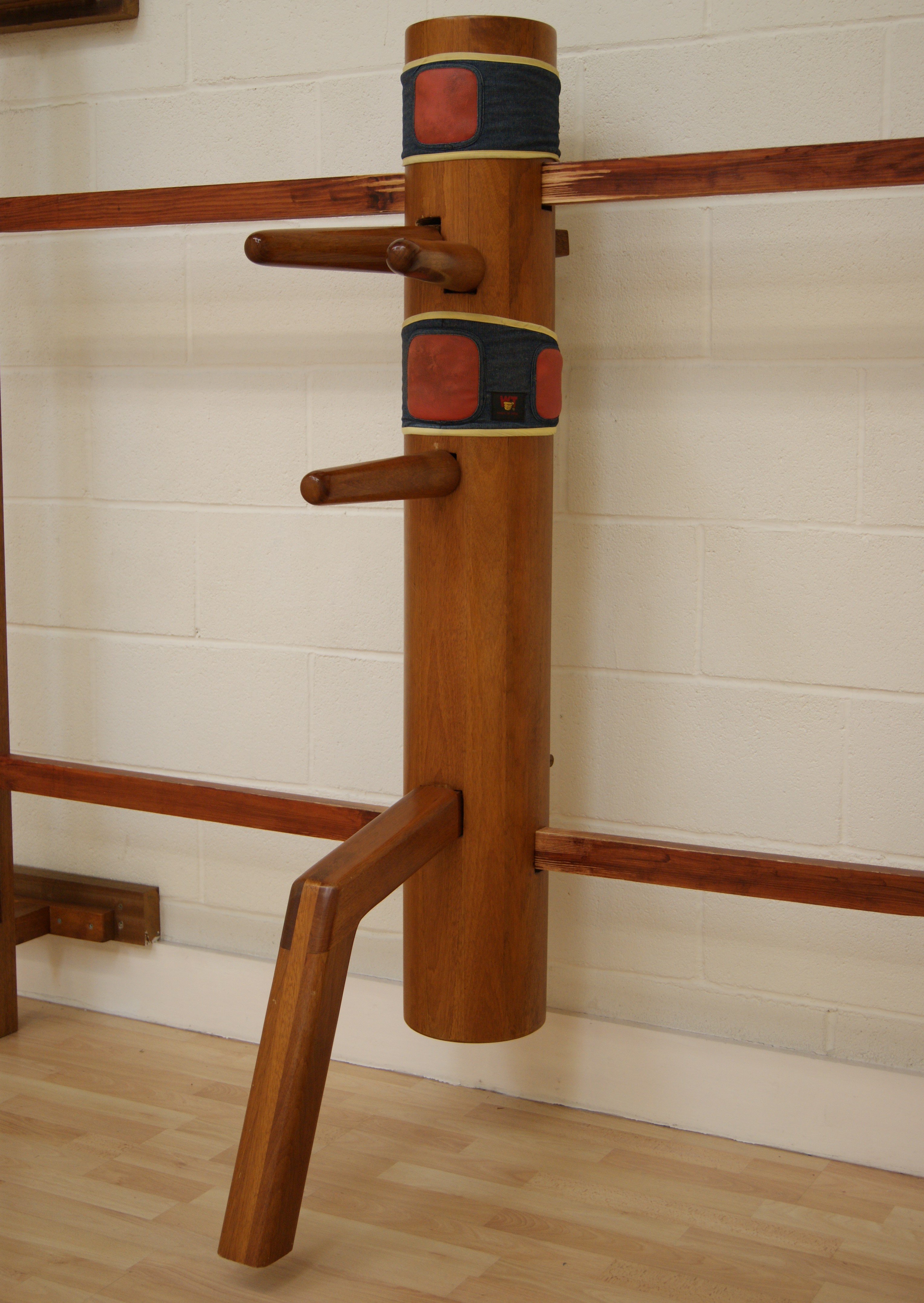 The Wooden Dummy techniques are for the advanced practitioner after they have learnt, understood and mastered the first three Wing Chun forms, Siu Nim Tau (A Little Idea). Chum Kiu (Seeking the Bridge) and Biu Tze (Thrusting Fingers).

There are 116 movements in the Wooden Dummy Techniques 16 of which are kicking movements (8 for the left foot and 8 for the right foot). These techniques are the most superior and knowledge of the applications will enable you to react more swiftly than a fellow student who only applies the fundamental techniques of the other forms. A student who applies complicated movements to defend an attack will usually find that the Wooden Dummy techniques will simplify the movements of the counter attacks should they use them.